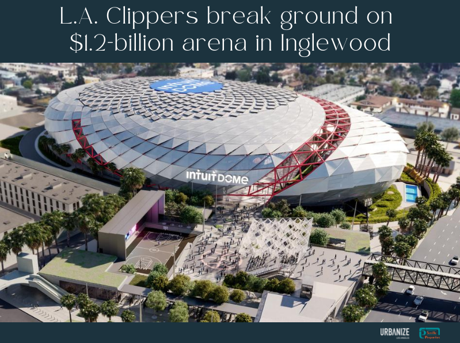 Four years after announcing plans to decamp from Staples Center to a new home in Iglewood, the Los Angeles Clippers have broken ground on a new arena at the intersection of Century Boulevard and Prairie Avenue.

The 18,000-seat arena, scheduled to open in time for the 2024-2025 NBA season, will be named the Intuit Dome as part of a 23-year naming rights agreement with Intuit, Inc., the company which produces software platforms such as TurboTax, QuickBooks, Credit Karma, and Mint.

“When we began the search for a partner for the L.A. Clippers and our new dome, we looked for one that shares our passion for technology, the pursuit of innovation and our commitment to customers, fans and community,” said Clippers chairman Steve Ballmer in a news release.. “Intuit is a perfect fit and we’re excited to be calling our future home the Intuit Dome.”

The naming rights agreement is accompanied by a commitment from Intuit to provide $1 million over the next three years to continue a program with local school districts that provides financial education to students, as well as a commitment to offer free tax preparation services to low-income services in the surrounding area.

Likewise, Ballmer and the Clippers have agreed to a $100-million community benefits package that would go toward affordable housing development and preservation, homeowner and rental assistance, and other community projects in Inglewood.

AECOM is designing the arena, which according to architectural plans would rise approximately 150 feet in height.  Renderings portray the building as an elliptical structure with a grid-like exterior and numerous carve-outs used to create open-air decks.

The Intuit Dome will ultimately serve as the centerpiece of a broader 28-acre entertainment complex built on land formerly controlled by the Inglewood Redevelopment Agency.  The $1.2-billion project is expected to include:

The construction of the arena was not always a certainty.

When the Clippers and the City of Inglewood announce plans for the arena in 2017, the project was faced with opposition from the Madison Square Garden Company (MSG), the concert and entertainment company which converted The Forum into a live events venue nearly a decade ago.  Arguing that Inglewood Mayor James Butts had deceived them into forfeiting a ground lease for the future arena site by claiming that the property would be developed with an office park, MSG sued to block construction of the then-unnamed project.  Ballmer eventually resolved the dispute by purchasing the Forum for $400 million - a significant mark up from the $23.5 million that MSG paid in 2012.

Construction is starting for the Intuit Dome just one year after the debut of SoFi Stadium, the new home of the Los Angeles Rams and Chargers, which at a cost of $5 billion, is the most expensive stadium ever built.  The 70,000-seat venue is the centerpiece of a 300-acre mixed-use development that will also include housing, offices, retail, a hotel, and park space.

Inglewood officials hope to connect the new developments to Metro's Crenshaw/LAX Line through the construction of an automated people mover system. The 1.6-mile elevated transit system would cost more than $1 billion, and is currently expected to begin service in 2026.